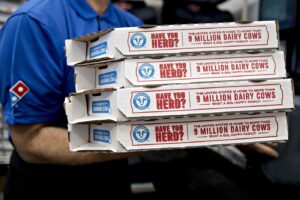 Many companies require workers to use their own cars for work, yet fail to reimburse their drivers adequately for the use of the car.  Here’s what you don’t know about Pizza delivery drivers.  Delivery drivers end up putting thousands of miles of wear-and-tear on their cars, paying for gas and repairs — before they realize the true cost of delivery driver work.  After driving expenses, drivers are left with a paltry paycheck that falls short of the minimum wage. Employment rights attorneys at Blanchard & Walker have fought for years on behalf of delivery drivers cheated out of basic minimum wages.

5000 Domino’s Pizza Delivery Drivers (Mata v. STA et al.):  Domino’s Pizza Drivers win conditional notice for a class of over 5000 drivers impacted by STA’ franchise’s under-reimbursement.  This pizza driver lawsuit states a common complaint among drivers in the industry – that systematic under-reimbursement for mileage and vehicle expenses violates the federal Fair Labor Standards Act and Michigan Minimum Wage laws.  The defendant, STA, once boasted to be one of the ten largest Domino’s Pizza Franchises in the Country.  At one time, STA had over 50 Domino’s locations throughout Michigan and Indiana. According to the Complaint, STA allegedly reimburses drivers $0.25 per mile or less, while the IRS calculates the cost of driving to be more than $0.50 per mile. Plaintiff alleges STA’s reimbursement scheme violates federal and state minimum wage law. Impacted drivers are being sent the court-approved notice, explaining their rights to participate and seeking to recover the true cost of driving pizza delivery.

400 Hungry Howie’s Delivery Drivers (Mcfarlin v. The Word Enterprises et al. and Graham v. The Word Enterprises et al.): In another recent B&W case, a Hungry Howie’s franchise chain was ordered to pay $650,000 to settle class action claims for their fleet of pizza delivery drivers.  The case started in 2016, when one pizza delivery driver came forward to disclose a systematic under-reimbursement of vehicle and mileage expenses. According to some estimates, drivers were reimbursed only $0.10-$0.20 cents per mile when they were paid $0.75 cents per delivery – even while the IRS mileage reimbursement was up to $0.58 cents per mile. The McFarlin case was certified for class action status in 2017.

1000(?) SCI Delivery Drivers (Ross v. Subcontracting Concepts Inc. et al.) – Last-Mile Delivery Drivers (or drivers who complete the last leg of a package delivery) can also fall victim to delivery driver scams that shift delivery costs from employers onto drivers.  In Ross v. SCI, the Complaint alleges Defendants knowingly misclassify last-mile drivers as “independent contractors.” The misclassification deprives them of the minimum wages and overtime owed to an employee under the law.  The SCI Drivers are engaged in delivery of auto parts moving in interstate commerce, and Plaintiff alleges that they are therefore exempt from the Federal Arbitration Act. The Sixth Circuit Court of Appeals has clarified that plaintiffs have a right to challenge the validity of forced arbitration agreements in Court before being forced into private arbitration. The Court Order Compelling Arbitration and denying Plaintiff’s Motion for Notice to similarly situated drivers is on appeal to the Sixth Circuit. While we pursue the appeal, B&W is talking to additional impacted delivery drivers and seeking witness statements.

If you have questions about your rights, or you believe you are an eligible class member, you can contact class counsel by clicking here.

How can I find more Information about my FLSA Minimum Wage and Overtime Rights?

Blanchard & Walker has a record of achieving remarkable results for Michigan workers in FLSA cases for minimum wage and overtime violations under the FLSA and Michigan wage laws. Common wage fraud schemes include:

How Do I Join a Class Action and How Does it Work for Me?

If you need the advice and counsel of a knowledgeable employment law attorney who can best protect your rights and help you pursue your legal interests. Contact us to request a meeting with one of our attorneys.

UIA CLASS ACTION LAWSUIT AND WHAT YOU NEED TO KNOW

EMPLOYEE RIGHTS & INFORMATION CENTER
We offer a wealth of free workplace-related information in our Employee Rights and Information Center.

Select a topic to continue:

YOUR WORKPLACE RIGHTS
PROTECT YOUR RIGHTS