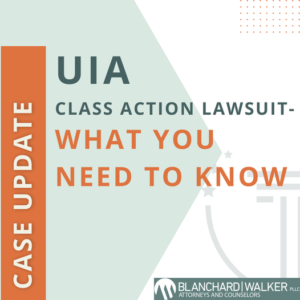 8/26/2022 UPDATE: NEW UIA CLASS ACTION FILED.  In the federal court Complaint filed in Kreps v. Michigan UIA, the Plaintiffs represent Michigan Unemployment Claimants who never got the pandemic relief benefits they were promised, and others who had benefits halted based on determinations that are on appeal and have not become final.  The Plaintiffs in the Kreps Complaint allege violations of Due Process rights under the US Constitution and also violation of a prior settlement agreement with the Unemployment Agency.

In the Saunders UIA Class Action Complaint, Blanchard & Walker clients allege Michigan’s Unemployment Insurance Agency is illegally assessing “overpayments” and initiating collection activity against a broad class of UIA claimants who relied on pandemic unemployment assistance in 2020 and 2021.   The Saunders lawsuit seeks injunctive and other relief to recover for unlawful collections that violate the Michigan due process rights of UI claimants.

The Agency has previously responded with a series of public announcements regarding partial suspensions of collection and promises of waivers.  First, the Agency announced a temporary halt on new collections, until May 7, 2022. More recently a press release claimed to halt collections for nearly 400,000 claimants.   But the announcement later went on to list many exceptions.  Only some types of *new* collection were suspended.  Current collections do not appear to be suspended.  We continue to fight against unlawful collections activities. Although we hope for the best, recent reporting has suggested the Unemployment Agency may not be able to make good on the waivers as promised.

Court of Claims June 13, 2022 Opinion and Order on Preliminary Injunction and Agency Motion to Dismiss. Preliminary Injunction Granted! – because Plaintiffs are likely to prevail on due process claims related to unauthorized Agency collection before UIA Claimants have had a hearing and opportunity to appeal the Agency’s late reversals of benefits.

But nothing is that simple… and the Michigan UIA continued to fight back. The Agency filed a new motion seeking to limit the scope of the injunction to only the named Plaintiffs (and asking the Court to allow continued collection against everyone else). In the August 11, 2022 Opinion, Court of Claims Judge Brock Swartzle confirmed that the preliminary injunction extends to prohibit further collection activity against everyone with timely pending appeals.

ISSUES AT THE COURT OF APPEALS

Meanwhile, Plaintiffs have filed an Application for Leave to Appeal the portions of the Court of Claims’ June 13, 2022 Order dismissing Plaintiffs’ additional claims for Agency illegal collections more than a year after benefits, and for failing to provide an administrative process to review for whether overpayments should be waived based on Agency error.

The lawsuit alleges three practices of the Agency are unlawful:

The full complaint in Saunders v. Unemployment Insurance Agency is available here.  Potentially hundreds of thousands of Michiganders are impacted.  If you believe that you may be impacted by one or more of these practices, you may complete a short survey to provide your information.  Then we can reach out if your assistance is needed.

*WE ARE NOT ABLE TO RESPOND TO INDIVIDUAL INQUIRIES*

*WE ARE NOT ABLE TO PROVIDE INDIVIDUAL ADVICE OR REPRESENTATION*

Depending on your location and income level, you may qualify for representation or counseling from one or more of the following groups offering UI representation:

You may consider filing a report regarding your UIA experience to the Attorney General’s office here.

If you would like to notify the Governor’s office of your UIA experience, you may do so here.